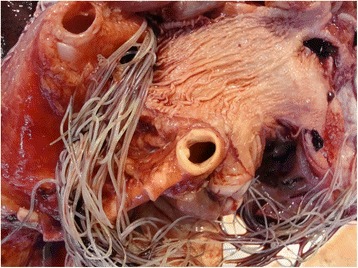 In heartworm disease, several biomarkers of cardiopulmonary injury and inflammatory activity have been studied during the recent years. D-dimer is a fibrin degradation product present after a clot is degraded, which has been reported to provide support for the diagnosis of pulmonary thromboembolism in heartworm disease. Furthermore, concentrations increment with increased disease severity and during the adulticide treatment. This increase in concentration has proved to be valuable. Cardiac biomarkers troponin I, myoglobin and NT-proBNP demonstrated presence of myocardial injury and heart failure, especially in chronic infections, which in some cases, slightly improve after the adulticide treatment. An acute phase response in dogs with Dirofilaria immitis, characterized by variations of acute phase proteins (APP), has been reported, indicating inflammatory processes that could contribute to disease progression. Among them, C-reactive protein (CRP) increases according to the severity of the disease; and a strong correlation between pulmonary hypertension and CRP has been observed. In cats, little work has been done to ascertain the utility of these biomarkers in feline heartworm; the only published study in D. immitis-seropositive cats reported significantly higher concentrations in positive APP serum amyloid A, haptoglobin and ceruloplasmin.